Sitting next to the future 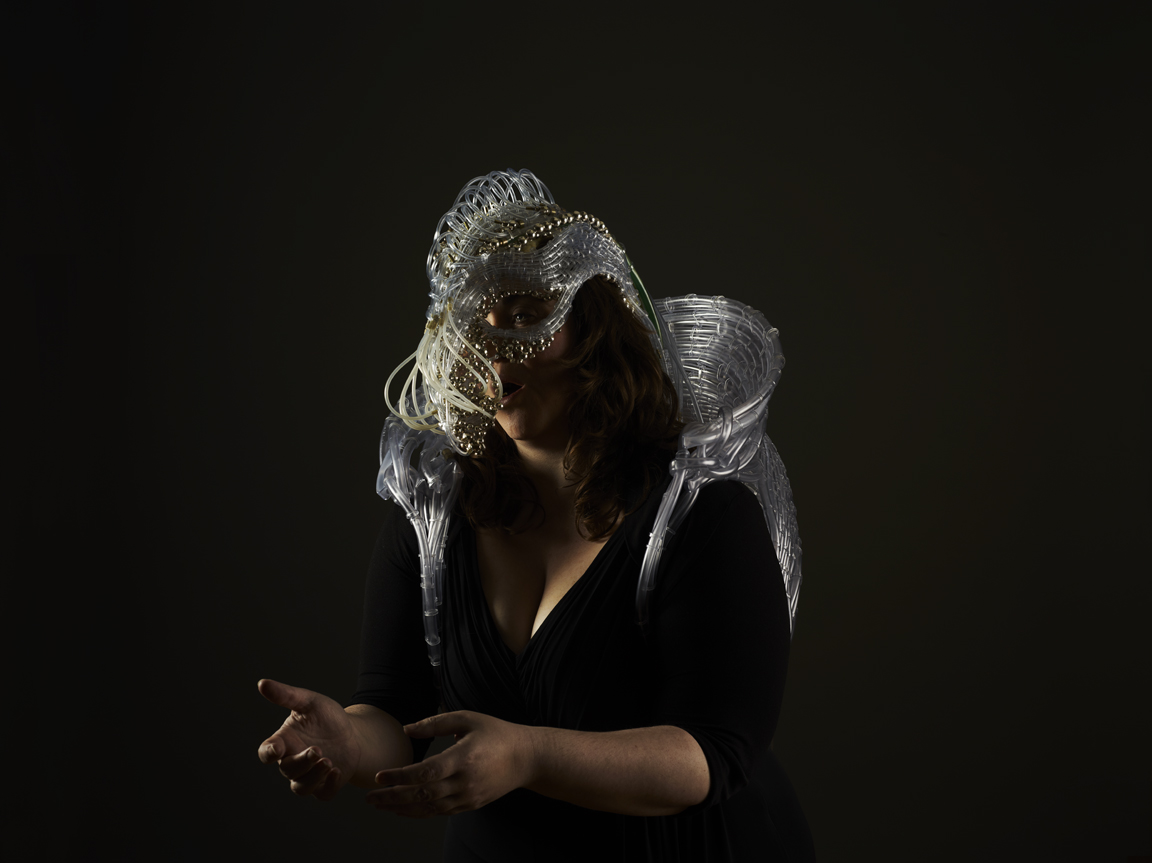 How can an opera singer become the producer of a future food? Explore, The Algae Opera, where song is a tasty experience.

Carmen clicked her castanets to seduce. Dido drank a vile of poison to nobly end her life. Charlotte kept letters to remind her of a love that could not be. In The Algae Opera, the heroine uses seaweed to feed the world.

Admittedly, you may be thinking how does slimy seaweed beat a vile of poison in this game of opera props top trumps? But the answer is fairly straightforward. In The Algae Opera, the seaweed isn’t a prop that helps define a character. Rather, the idea of the prop has been transformed and with it, our understanding of what the role of opera can be in the future.

The Algae Opera is a collaboration between two artists (Burton and Nitta), a composer (Matt Rogers), and a mezzo-soprano (me). This micro-opera considers our world in 2060 and imagines us living in the Algae Age where algae are the world’s main food supply. In this future state, one of the most sought-after producers of algae is the algae opera singer: An opera singer transformed with biotechnology to grow algae with breath, sonically enhancing it to taste bitter or sweet.

The biotechnology transformation occurs in the form of a symbiotic suit designed to produce algae. As the algae opera singer sings, a mask captures the breath, transporting the CO2 into a suit connected to algae tanks. Once enough algae have been grown, it is harvested and filtered for consumption.

This project, which premiered in 2012 at the V&A in London, moves opera out of the opera house and onto the dinner plate. And as we’ve all experienced when moving house, some things don’t work as well in the new place. One of the biggest vocal challenges I have faced is considering how the opera voice, traditionally built for the size of the opera house and therefore requiring a sustained line, is re-built to the food needs of the world’s population as defined by the algae mask. Due to this re-design, the musical structure and performance practice of today’s operatic tradition shift and enter a future state.

The musical structure and systems of The Algae Opera “represent an imaginary ‘folk’ music, born of a Human/Algae symbiote culture where breath itself is the revered symbol of existence.” (Matt Rogers)  This design means I have to make a significant shift in the use of breath.  The algae mask captures CO2 to grow the algae and requires a non-reflexive breath cycle to maximise CO2 output.  This means the singer needs to take the breath cycle to the point of collapse. In today’s opera tradition, this type of breath cycle is considered inefficient and undesirable due to the issues surrounding sustainability and aesthetic. However, in The Algae Opera, a breath cycle based on a point of collapse is considered efficient and ultimately desirable, for it produces more algae.

In terms of the sonic enhancement of the algae, our relationship to pitch, tone and vocal colour also change. Tone and colour in the algae framework are no longer linked to text and texture, but also to flavour. What this means for me as a trained singer, is that I have to re-think technique, the purpose of the voice and explore a new vocal aesthetic to ensure that an algae sound creates the food required.

This re-design is also pushing the creative team to work differently. As we play with the project’s concept, we discover the future world that shapes the algae opera singer. This process of discovery is similar to the co-creative character approach of the film director, Mike Leigh. The expectations of this rehearsal process mean that the singer is encouraged to shift from the interpreter to the co-creator. And opera moves into a manufacturing age where costume and props are re-defined as production tools.

For me, personally, the beauty of this project is three-fold. The Algae Opera helps us to ‘imagine how our bodies in the future could be re-designed to eat differently, and how new rituals of eating will create alternative relationships with the ‘producer’ and enhance the sensory experience of eating’ (Burton and Nitta). It’s also about finding different ways of working as a singer and exploring how dramaturgy works in this new performance paradigm. And it invites us to reconsider the relevance of opera in future worlds by asking a tantalising question: what are we designing today’s singers for?

This blog post is an edited version of the original article written in 2012 and posted on my singing journal, Current Song of the Day. The edits are updates to historical references (the premiere date), a few bits of grammatical tidying up and updated website links

Next steps…
Find out more about the opera’s protagonist, Evalga: Made for Life
Learn how the character of Evalga was created: The alternative entrance to Narnia
Discover the menu served at the world premiere: Daily specials at the V&A
Explore the After Agri project: BurtonNitta
Meet the composer: Matt Rogers
Get to know me: Louise Ashcroft